
On a fateful day on December 9 Thursday 1971 , an otherwise usual flight from Trivandrum Airport which took off at 12.10 p.m and was scheduled to land in Madurai as per schedule had an unexpected occurrence of colluding into a hill in the Meghamalai Hills few minutes after its take off. Nearby residents from the estate were the first ones to learn about this incident. Mr.Jayaraman , who was on his regular duty as a Civilian Nurse in Dindigul Government Hospital was alerted couple of hours later. On hearing this, He loaded a rescue van with the first aid kit and required supplies and rushed to the accident spot.  The HAL 748 which was carrying 31 occupants including the crew had crashed right next to an estate from what he had observed.  This came in handy as the estate residents helped him to conduct the treatment until help arrived. What followed for the next few hours was a battle to save the passengers who were struggling for their lives.

Mr. Jayaraman had immediately intimated the Government Hospital of Madurai and Dindigul for a special team of doctors, while he converted a nearby school into makeshift hospital and started administrating first aid to the survivors with the help of the estate residents. He worked continuously until early morning next day, when the full-fledged team arrived, for hours trying to save the passengers, with the limited supplies he had along with him.  It is also significant that in the early morning he nearly collapsed as he had been sucked by leeches all along in the night while he was trying to save the lives of the passengers with so much of passion that he did not notice his own uneasiness, while performing his duty towards the nation with utmost commitment. There were about nine survivors who survived this crash. Mr.Jayaraman was bestowed National Award for his commitment and dedication towards his duty, in 1972 by the President V.V.Giri himself for this immense work towards the Nation. He went ahead and held various posts with the State Government of Tamil Nadu and contributed towards the society, one of the Key posts he held was as the Head of Department of Nursing College, which is attached to Madras Medical College, where he trained and mentored a lot of nursing studentsAs much as commitment towards his work, he was charming and jovial, which made him a universal favorite among the nursing students of Madras Medical College, and he was referred as ‘Master Jayaraman’ dearly  by his students which later became his identity.

It is also remarkable to note that His wife Ongole Hamsabai an inhabitant of Madras, a nurse who worked along with him holding various posts with the Government of Tamil Nadu, was one of the daughters of Ongole Devarajulu Naidu who was a post master and had voluntarily served in the Army during in British India in both the World Wars I and II. He was also seized and tortured for days by the Japanese Army and finally released after few months of captivity.

My book ‘The Highway Mafia’ is dedicated to my Grand Father Master Jayaraman  and Great Grand Father Ongole Devarajulu Naidu who has been a great source of Inspiration for me to be a part of social activities and rescues. 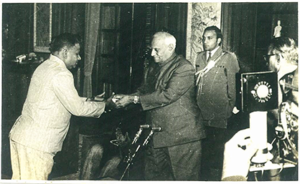 Master Jayaraman receiving his National Award from V.V.Giri- the President of India

Master Jayaraman with the CM Puratchi Thalaivar MGR during his service  with the State Government of Tamil Nadu.